Whether It’s A Hoax Or A Cover-Up, It Doesn’t Matter 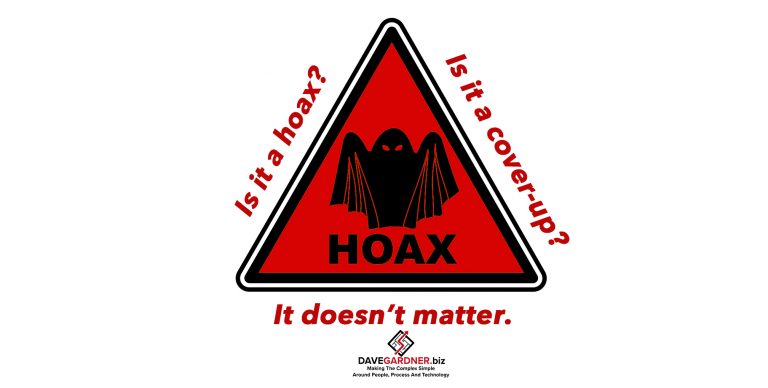 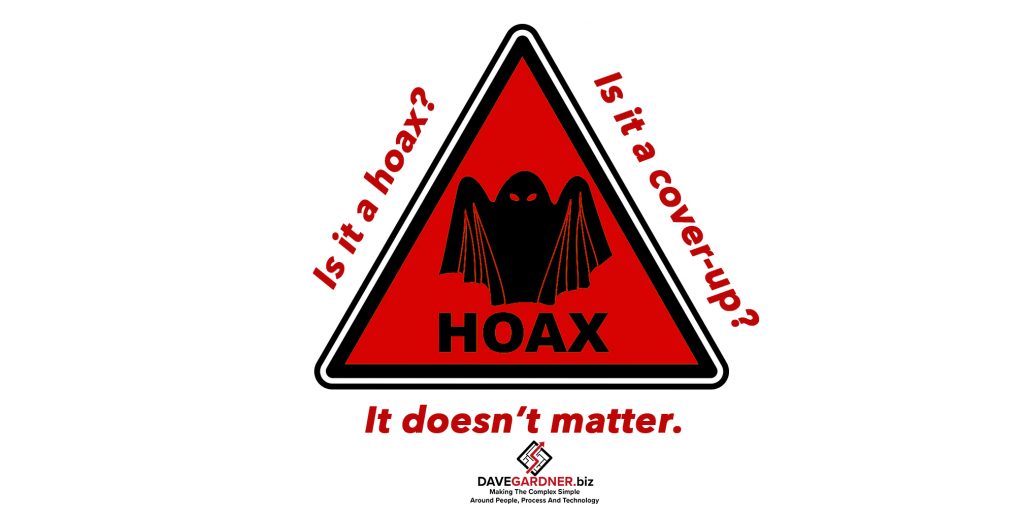 Is it a hoax or a cover-up? Sometimes, it doesn’t matter. Those of us here in America have heard the word “hoax” a lot in the last 4 years. The word “hoax” has been used to dismiss factual situations. “Hoax” means “a humorous or malicious deception.” Characterizing something as a hoax can also be a means of covering up a legitimate concern that needs to be addressed.

A hoax or cover-up can actually be a legitimate threat to the future of a business. Let’s consider some examples.

Boeing didn’t want to admit that there was a serious threat inherent in the design of the 737 MAX that killed nearly 350 people in 2 separate airplane crashes, which has cost the company over $11 billion thus far. Boeing didn’t voluntarily come clean and admit fault when people within the company knew of the fault. This was a cover-up. This was criminal negligence, much more than a mere product liability issue. I wrote about this in an article on Boeing’s world-class example of “corporate-speak”.

The Doctor That Killed My Mother – Malpractice

A doctor killed my mother. It was treated as medical malpractice rather than what it should have been treated as; manslaughter. Medical malpractice is a civil legal matter; manslaughter is a criminal matter requiring that the government prosecutes the case against the doctor. I believe the doctor’s gross negligence rose to the level of a criminal matter. Yet, it is rarely the case that a doctor is prosecuted for a crime.

A cardiologist named Conrad Murray was criminally prosecuted as a result of Michael Jackson’s death. The notoriety of the victim likely drove that decision for the government to prosecute him. The doctor was sent to jail and served 2 years of a 4-year sentence for involuntary manslaughter.

In a nutshell, my mother needed her blood to be thinned for a procedure in order to be done safely. The known outcome of not having her blood thinned was a blood clot could form during the procedure and travel through the body until it caused a stroke. My mother suffered a massive stroke 3 days after the procedure.

After my mother was sedated prior to the procedure, the doctor claimed he told her that her blood-thinning level “was a little bit low” and asked if she wanted to move forward with the procedure. He claimed at trial that she said she wanted to proceed.

The reality was the hoax of a cover-up:

JPMorgan Chase, the largest bank in the United States, agreed Tuesday to pay a record $920 million to settle charges that it engaged in manipulative trades of futures tied to precious metals and Treasury bonds.

The Commodity Futures Trading Commission said in a statement that JPMorgan Chase (JPM) was involved in “deceptive conduct” over a period of at least eight years that included hundreds of thousands of so-called spoof trades — orders that were placed and quickly canceled because they were never intended to be executed — designed to fool investors.

Spoofing can manipulate markets by indicating false demand for an asset. The practice can raise or lower prices of assets, depending on what the spoofer desires.

“This action sends the important message that if you engage in manipulative and deceptive trade practices you will be caught, punished, and forced to give up your ill-gotten gains,” said CTFC Division of Enforcement Director James McDonald in the statement.

Could Your Name Be Next?

Executives can deceive themselves, their teams, their board of directors, their shareholders, and their customers by dismissing legitimate threats to their businesses. This is dangerous, even deadly, and potentially career-limiting or worthy of incarceration.

What threats potentially impact your business? What things are you deceiving yourself and your team about that really need attention and action?

Let’s say your company sells highly-configurable products that are engineered-to-order.

Are you believing that everyone in your industry has the same problems so it’s not much to worry about? That might be true until a competitor resolves the issues and eats away at your market share.

If a situation is real, it is best not to treat it like a hoax or cover it up. The best practice is to prioritize the issue and begin working to resolve it.

So what, then, is right knowledge?

All information
that sets you free
and connects you to your core,
is the right knowledge.

Everything else
is conditioning
that restricts you from
expanding and evolving.