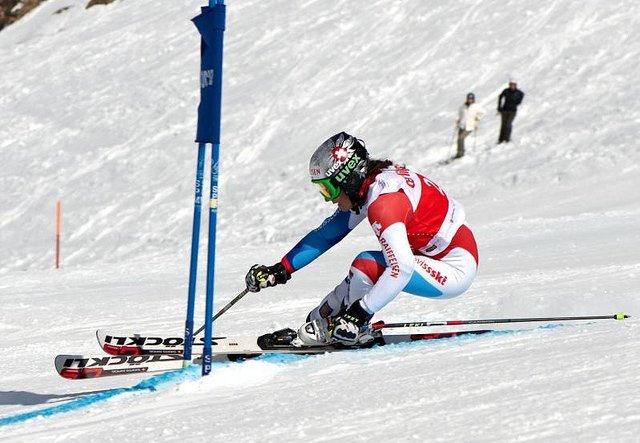 In the mid-80’s, I participated in a corporate ski challenge at Squaw Valley. I was in the second tier group of skiers.

During the Saturday morning session, we had 3 practices runs. Former Olympic skiers (who were part of corporations) made it down the icy race course in about 20 seconds; my eventual time would be about one minute.

I never completed the course in the morning training sessions. At lunch, I asked what would happen if I failed at all 3 afternoon qualifying runs. The answer: “That’s never happened before.” For some reason, I wasn’t reassured.

Yet, he was right. It didn’t happen. I made it into the finals with my team and got to race with my team on Sunday.

I wasn’t willing to risk bodily harm by hurtling myself down the icy race course. At that point in my life, I don’t recall having any injuries or chronic pain in my body. I was a pretty good skier but not on an icy slope.

Our team finished in third place. [Pssst: Don’t tell anybody that there were only 3 teams in the second tier.]

The antithesis of me has to Lindsey Vonn. Vonn finally retired from World Cup skiing this weekend at the age of 34. She has won 82 races in her storied career. Her body can no longer do what she needs it to do. In a Washington Post article, the author writes:

What she is, at her core, is a competitor. A fearless, bad-ass competitor who should be remembered not only for the races she won, but for her unrelenting insistence on getting back up and attacking again. At that, she has no peer.

Lindsey kept coming back from horrific injuries and accidents. Can you imagine:

Lindsey is an exemplar of mind over matter–her mind pushed her to do things that most uninjured skiers would never attempt.

While the Washington Post article suggests what might be next, I have no doubt the next chapter of her life will be no less bodacious than the last. Go Lindsey, go! Godspeed.

What you repeatedly
say to yourself about yourself
becomes your identity.

Decide who YOU want to be,
or others will do it for you.

YOU are the ONE
holding the KEY
to your best self.