Honoring Those Who Made The Ultimate Sacrifice 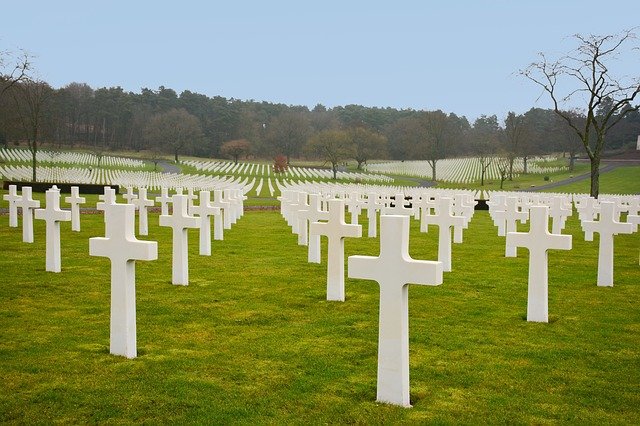 How do we pay homage to our U.S. veterans who gave their lives in service to our country? How do we express our gratitude? When I see a war movie and see the toll our fighting men and women suffered, it is truly humbling.

During a trip to Belgium, I dipped my feet in the very cold ocean water. It made me think of what a horrific shock to the body and mind being partially or fully submerged in the water at Normandy had to feel like all the while being shot at and assailed by larger weapons by the Germans.

As a soldier, you had to know there was some chance you weren’t going to survive but you did what you were ordered to do anyway. Seeing one’s comrades being shot down and killed to the left and right of your position had to be nearly as horrifying as being shot at. The military wants soldiers who do what they are told to do without question irrespective of whether it puts them in harm’s way.

As war evolved in the 20th century, there was less and less hand-to-hand combat. More is done from the air and sea. During the Persian Gulf War in 1990-91, the U.S. suffered 148 combat deaths. The Iraqis were estimated to have lost 100,000.

I am a professional trumpet player. Two soldiers I went to high school with were killed in Vietnam. They were to be awarded medals posthumously honoring their service and sacrifice. Their parents asked if I’d play Taps at their medals ceremony. I told them it would be an honor.

None of us really knew why the U.S. was involved in the Vietnam War back during the war. These 2 soldiers had been drafted, trained and sent overseas. I’ll never forget a phrase that was read for each of their medals awarded. It said, “killed fighting for the ideals of the Republic of South Vietnam.” I was repulsed by this thought. None of us knew anything about the “ideals of the Republic of South Vietnam.” They were killed because they were drafted and sent there by the U.S. Army. They wanted to survive their year of service and head home.

I played Taps to conclude the ceremony. A General approached me, said I had played Taps beautifully and asked if I wanted to join everyone inside for “cookies and punch.” I declined. I wasn’t in the mood. Just writing this puts me back in that mood…a mood of disgust.

Why do I write about this? We can honor a veteran’s service and sacrifice even if we don’t agree with the war they were involved in. A lot of Vietnam Vets feel as though their service wasn’t appreciated–that they were somehow part of the problem. They weren’t. I’m sorry I didn’t do a better job of handling this distinction back then.

“There are many memories of my time in Vietnam in 67-68, but one, in particular, stands out for this Memorial Day. During the siege of Khe Sanh, one day at Da Nang Airbase, I was driving a vehicle alone on the north end of the runway. As I headed across toward the Marine side (west), I stopped dead about 50 yards from a hangar where I saw the stack of body bags. I stayed there and let the emotions rage through me for just a few minutes. For all of those guys and the friends I grew up with who were lost during that time, thank you.” – Ronald Ferrill, Vietnam War Veteran

To Ron Ferrill and all who have served their country, I say “Thank you for your service.”