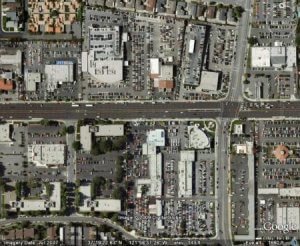 Look at all that auto inventory!

One interesting note about this image–it’s old.  How do I know this? The dealership in the upper right hand corner with inventory underneath the “N” and the compass watermark and directly across the street–the GMC/Buick/Olds dealer–stopped doing business 6 months ago. The lot is empty; there’s no “moved to a new location sign” anywhere to be seen after some 25 years in this location.

The April 9, 2009,  Wall Street Journal had an article “Auto Dealers’ Ranks Shrank by 271 in Quarter Amid Sales Slump.”   Why?  According to the article:

Many dealers closed as their lenders tightened terms and costs outstripped revenues.

Some consolidated or closed up shop voluntarily.

What’s so great about dealers having all this inventory?  Nothing.  The dealers probably would have the consumer believe that a large inventory means more choice for the consumer.  It’s not true–it’s an illusion.

In all the years I’ve been buying or leasing autos, I’ve found that the dealer seldom has exactly what I want.  They either have to go find what I want from another dealer or I have to settle for something other than what I had in mind.  Isn’t that your experience?

The auto inventory represents cost–the cost of flooring the inventory until it is purchased.  In order for the auto manufacturer to recognize the revenue from the sale of each vehicle, the vehicle title transfers to a financing institution.

Since the dealers don’t pay cash for the vehicles up front, the dealers have to finance them–and here’s the key part–the dealer bears the cost of flooring each auto each month until a customer comes along and purchases the vehicle.  What does that cost amount to?

Based on these numbers, the cost of flooring these vehicle would be US$75,000 for 3 months or US$25,000 per month.  This is cost–there is no value-add as a result of this incremental dealer cost. It must be paid from the combined profit margins of all vehicles sold at that dealership.  With all the inventory available in the dealer channel, the profit margins in this market are pretty small.

Compounding this issue is the average age of the inventory has been increasing as sales have slowed adding additional dealer cost that cannot be passed to the consumer.   Often, the dealer will  dump the inventory at a loss just to stop the flooring cost.  Who would have thought that no one would want that pink Ford F-150 pickup?

Earlier this year, I read that Chrysler was asking their dealers to add additional inventory.  As a manufacturer, that would certainly be good for Chrysler. But, how would that help the dealers who were already inundated with inventory? It wouldn’t.

Mass production is an inappropriate business model for the auto industry.  It’s time for a paradigm change.  Mass customization is a way to enhance relationships with customers and reduce costs.

Mass customization can do in the 21st century what mass production achieved in the 20th century–give the consumer what they want at lower cost. Which auto industry CEO will step up to the plate to make the change?

What do you think?